Rights of nature or earth rights is a global movement that seeks to grant legal personhood to animals and eco-systems for the purpose of recognizing the rights of nature in law.

(2022) The Global Legal Movement to Treat Nature as a Person Nature Is Becoming a Person. How to make sense of the new global trend that grants legal rights to animals, plants, and rivers. Source: Foreign Policy

GMO can be seen as 'rape of nature' or 'corruption of nature'.

Rights of nature - the treating of nature and animals as a person that can be legally defended - provides a legal basis to achieve results when it comes down to protection against GMO.

Telling is how the GMO industry attempts to oppose criticism originating from moral concerns such as the idea that animals have a dignity. They intend to 'combat' movements such as rights of nature as if it concerns a war on science.

A headline in a major science magazine provides an example:

(2021) The Antiscience Movement Is Escalating, Going Global and Killing Thousands Antiscience has emerged as a dominant and highly lethal force, and one that threatens global security, as much as do terrorism and nuclear proliferation. We must mount a counteroffensive and build new infrastructure to combat antiscience, just as we have for these other more widely recognized and established threats.

The people that destroy GMO crops are blamed for 'killing thousands of children' due to the utilitarian value that those crops would provide to those children. 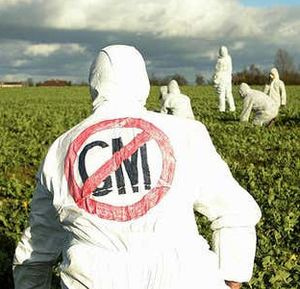 Global outrage ensued after group of Filipino farmers destroyed a test crop of golden rice. There has been little recognition of the Sisyphean struggle of farmers in countries such as the Philippines, Bangladesh and India, yet these farmers have been described as anti-science Luddites that cause the deaths of thousands of children.

A perspective on the 'war on science' propaganda by an academic philosopher:

(2018) “Anti-science zealotry”? Values, Epistemic Risk, and the GMO Debate The “anti-science” or “war on science” narrative has become popular among science journalists. While there is no question that some opponents of GMOs are biased or ignorant of the relevant facts, the blanket tendency to characterize critics as anti-science or engaged in a war on science is both misguided and dangerous. Source: PhilPapers (PDF) | Philosopher Justin B. Biddle (Georgia Institute of Technology)

An example of the 'war on science' propaganda:

(2018) Anti-GMO activism sows doubt about science Russian trolls, aided by anti-GMO groups such as the Center for Food Safety and Organic Consumers Association, have been strikingly successful in sowing doubt about science in the general population. Source: Alliance for Science

The propaganda concerns combatting and personally attacking with multi-million USD global marketing budgets based on an ideology - a certain belief about science - the belief that 'sowing doubt about science' is a wrong that should be combatted as a major security threat. It concerns prosecuting people for heresy of science.

Sound philosophical theory and reasoning can prevent the war that is pushed by the destroyers of nature or 'the GMO industry'.

The GMO industry originates from the pharmaceutical industry with a history of profound corruption. GMO is an unguided (dumb) practice primarily driven by the short term financial interest of companies.

To win the GMO debate, it will concern the addressing of morality for nature and academic philosophy of 2022 didn't even get started on that topic.

(2022) ‘Rights of nature’ Is a Faux Rights Revolution Entangled in Anthropocentrism The inability to move beyond anthropocentrism, even while granting legal personality to nature, is essentially because the concept of rights is people-centric. Rights were fundamentally developed to protect the dignity of individual human beings. There are inherent limitations to extending this framework to non-human entities.

This is why granting rights to nature presents us with a new set of problems. Balancing the rights of nature with competing human rights may see nature’s interests take the back seat. So the focus should instead be on inculcating a respect for ecology instead of farming out rights in the traditional sense to the natural world. Source: science.thewire.in

The rights of nature movement is a very good concept but it would require urgent enhancement of humanity's capacity to morally reason on behalf of nature.

Science is utilitarian of nature. Morality is eternal of nature and involves different interests - interests that may span thousands of years time and that may be completely outside of the direct interests scope of a human.

Why philosophical exploration to protect against GMO?

This question should be examined with in mind the understanding that the question demands an answer outside the scope of utilitarian arguments (i.e. usefulness from a human perspective). One will need a strong motivation to push philosophical exploration beyond the scope of 'usefulness' (e.g. making money) and that may be more difficult than expected.

Consider subscribing to the newsletter, making a donation or join as volunteer.